One of the first thing that draws me as a reader to a book is the cover. As an author, I’m always curious about the design involved in a cover:  the colors, the fonts, the imagery, etc. The covers I share here are not a promotion for the book itself, simply an admiration of the cover or aspects of it.

The Golem and the Jinni, by Helene Wecker

In The Golem and the Jinni, a chance meeting between mythical beings takes readers on a dazzling journey through cultures in turn-of-the-century New York.

Chava is a golem, a creature made of clay, brought to life to by a disgraced rabbi who dabbles in dark Kabbalistic magic and dies at sea on the voyage from Poland. Chava is unmoored and adrift as the ship arrives in New York harbor in 1899.

Ahmad is a jinni, a being of fire born in the ancient Syrian desert, trapped in an old copper flask, and released in New York City, though still not entirely free

Ahmad and Chava become unlikely friends and soul mates with a mystical connection. Marvelous and compulsively readable, Helene Wecker’s debut novel The Golem and the Jinni weaves strands of Yiddish and Middle Eastern literature, historical fiction and magical fable, into a wondrously inventive and unforgettable tale. 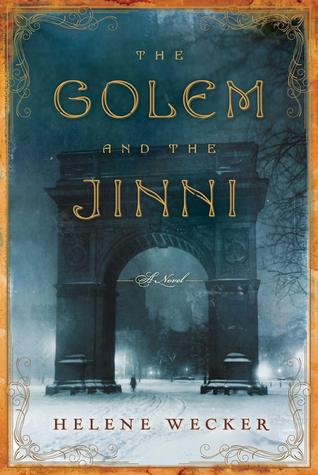 My impression:  This stunning cover reuses Jessie Tarbox Beals’s circa 1910 photograph “Washington Arch at Midnight.” Beals was the first published female photojournalist in the United States and the first female night photographer. While it doesn’t sound like Beals has anything to do with the story, the NYC setting and haunting, lonely figure of the arch at night suits the synopsis perfectly.  Beals’s photograph was black and white, but I love how the designers have incorporated subdued teal shades into the cover. It makes the white winter cityscape appear stark and bright. The embellishment in the corners and the font of the title hint at an ornate otherworldliness befitting a tale of Jewish and Arabian folklore.

3 thoughts on “Cover Crush: The Golem & the Jinni”