One of the first thing that draws me as a reader to a book is the cover. As an author, I’m always curious about the design involved in a cover:  the colors, the fonts, the imagery, etc. The covers I share here are not a promotion for the book itself, simply an admiration of the cover or aspects of it.

THROUGH THE SHADOWLANDS:  A SCIENCE WRITER’S ODYSSEY INTO AN ILLNESS SCIENCE DOESN’T UNDERSTAND, by Julie Rehmeyer

Julie Rehmeyer felt like she was going to the desert to die.

Julie fully expected to be breathing at the end of the trip―but driving into Death Valley felt like giving up, surrendering. She’d spent years battling a mysterious illness so extreme that she often couldn’t turn over in her bed. The top specialists in the world were powerless to help, and research on her disease, chronic fatigue syndrome, was at a near standstill.

Having exhausted the plausible ideas, Julie turned to an implausible one. Going against both her instincts and her training as a science journalist and mathematician, she followed the advice of strangers she’d met on the Internet. Their theory―that mold in her home and possessions was making her sick―struck her as wacky pseudoscience. But they had recovered from chronic fatigue syndrome as severe as hers.

To test the theory that toxic mold was making her sick, Julie drove into the desert alone, leaving behind everything she owned. She wasn’t even certain she was well enough to take care of herself once she was there. She felt stripped not only of the life she’d known, but any future she could imagine.

With only her scientific savvy, investigative journalism skills, and dog, Frances, to rely on, Julie carved out her own path to wellness―and uncovered how shocking scientific neglect and misconduct had forced her and millions of others to go it alone. In stunning prose, she describes how her illness transformed her understanding of science, medicine, and spirituality. Through the Shadowlands brings scientific authority to a misunderstood disease and spins an incredible and compelling story of tenacity, resourcefulness, acceptance, and love. 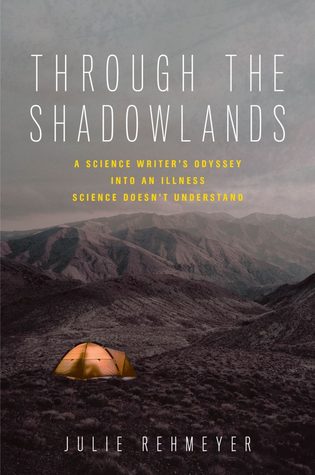 My impression:  The subject matter mentioned in the synopsis matches the cover so well. The landscape is rugged, desolate, and uninviting. The sole tent in that vast wilderness with the shadow of a single figure within highlights the tone of loneliness, isolation, and desperation. This cover is so haunting and evocative.