Tell me your story.

I’ve always been a keen reader, from the Hardy Boys as a kid to the Sword of Shannara as a teenager and nowadays mostly historical fiction. In fact, I love books so much I decided to try and write one myself. Almost 90,000 sales of my Forest Lord series later I’m still not sure I know what I’m doing but enjoying the ride!

Tell me about your latest book.

Blood of the Wolf has just come out on Audible/iTunes but my newest story is “The Prisoner,” which is a short story in Amazon’s Kindle Singles Program. Like all my books so far it’s part of the Forest Lord series but I’ve just started work on a brand new trilogy. This time I’m telling the tale of a druid who lives in the north of Britain just after the Romans have left the island. It’s been really exciting for me to begin creating a completely new character after four years writing about the Robin Hood mythos. 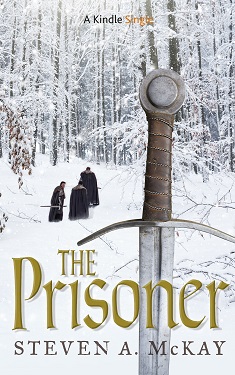 Where do you get your information and ideas for your books?

The internet! I’m sure everyone must say that but it’s true. Even when I use books for my research I get them from the internet. I buy a pile of books that cover my period then go through them all underlining and highlighting everything that might be of use. Sometimes it throws up really interesting stuff that turns into a plot line or even just a funny scene in one of my books. But it’s so handy to be able to quickly type in a search term like, “Roman Britain names” and find a list within seconds.

Do you have a specific process when writing a book?

Not really. I research to get a grounding in the period then try and come up with a basic framework for the whole series. From there I come up with stories for each book in the series but they can, and always do, change. The characters have a mind of their own! When I sat down to begin this new one (I’m calling it “The Druid” for now) I had expected it to start in the north of England but, without any real conscious decision on my part it began in Scotland, at the western end of the Antonine Wall (coincidentally where I live).

I just go with the flow and let things develop without sticking rigidly to any plans.

Do you have a writing/reading quirk or ritual?

I like to listen to black metal when I’m writing. I really need to concentrate so any music with a catchy beat or melody distracts me, and that means I have to put on some Enslaved, Darkthrone or Bathory when working on a new book. It’s almost white noise and really helps me focus.

What is something you’ve learned about yourself through the process of writing?

It’s something I really love to do. I mean, to the extent that my Xbox One is collecting dust. If I get a spare hour I’d generally prefer to write than play a game or watch TV. It really has become like my biggest hobby which is fantastic because it’s also turning into a career – I feel very blessed to have been given this ability to create stories.

What do you think makes a good story?

Honestly, I think it’s mostly about the writing/writer. I’m a big fan of Bernard Cornwell but his recent Uhtred books have been, for me, too drawn out. He should have finished this series in five books not ten, and yet –  I still read them and love them. It’s all down to his incredible writing, which transcends the plots and ideas. You could have the greatest idea for a book ever but if you don’t have a great style no-one will want to read it.

If you could only read one book over and over, which one would you pick and why?

Lord of the Rings. It’s so well written, the characters are fantastic, I own reproductions of a couple of the swords from the movies…Its just an amazing saga! There’s so much in there – like a prog-rock album from the 1970’s, you’re still finding new things years after you first discovered it and it leads to a really rewarding experience.

What books are currently on your night stand?

Perdurabo by Richard Kaczyknski (signed copy), The Path of the Hawk by Ian Graham (please, fantasy fans, check out this author he is brilliant!), The Cross and the Curse by Matthew Harffy (audiobook).

How do you organize your books?

Big to small. I like my bookshelf to look nice and tidy! To be honest though, I do most of my “reading” via Audible these days so most of my recent books are contained within the tiny memory card in my phone.

You’re organizing a literary dinner party. Which three writers, dead or alive, do you invite?
Philip K. Dick, JRR Tolkien and Terry Pratchett. I expect that would be a pretty lively evening and probably a mind-bending one too.

Imagine if those three got together and wrote a book? Pratchett’s funny characters, combined with Dick’s ability to make a reader feel like they’re losing their mind, all brought together in an epic Tolkien-esque saga!

Too much for a reader to cope with surely, but a dinner party would probably not be too dangerous.

Thanks for having me on your blog, Meghan, it’s been fun!

Thank you for joining me on Of Quills & Vellum today, Steven! It was a pleasure talking with you.

Find out more about Steven and his writing on his website or find him on Facebook, Twitter, and Amazon. And as an added bonus, if you sign up for Steven’s newsletter, you’ll receive a free Forest Lord short story that’s only available to subscribers.

One thought on “Eleven Questions…”